"And the king will say to them in reply, ‘Amen, I say to you, whatever you did for one of these least brothers of mine, you did for me.’ " 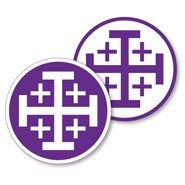 During my interview process for the Dean of Campus Ministry and Student Life position at Father Ryan High School, I received a packet of information in preparation. As I perused the Irish Ayes magazine, information about Athletics, and various Admissions-style packets, one particular thing caught my eye. It was an article from USA Today in 2013, an article titled “Catholic School Takes Silent Stand for Workers’ Rights.”   I am a proud Father Ryan alumna, Class of 2002, but when I was applying to work here in 2015, I had no idea we were the only high school in the nation to take a public stand on workers rights by refusing to be “branded” and refusing corporate endorsements. As an active Catholic and passionate advocate for social justice, I was, needless to say, impressed. When it was offered, I took the job.

When the history of Father Ryan High School in Nashville, Tennessee is written, one of its legacies will be that it was on the forefront of social justice – leading the way on civil rights in 1954 by being among the first schools to integrate in Tennessee, teaching Catholic Social Teaching as an integral part of its theology curriculum, and having a four-year comprehensive service-learning program rooted in the Gospel. In 2013, as a part of the Theology Speaker Series, a prominent workers rights activist and former athlete named Jim Keady visited campus. He spoke about his documentary film, Behind the Swoosh, and the human rights abuses that happen daily in the garment industry around the world. More specifically, as a former college athlete, Keady’s presentation focused on the globalization of athletic apparel production. Students learned that Catholic high schools and colleges around the country receive monetary incentives to “brand themselves” with the corporate logos of companies who are known violators of the basic principles of Catholic Social Teaching. When students went to the administration in 2013 asking Father Ryan to take a stand for workers rights, the adults followed the students’ lead.

Beginning in the fall of 2013, Father Ryan High School chose to go brandless. This meant that, when athletic apparel could not be procured from a company that met human rights standards, corporate logos were covered with a patch of the Jerusalem Cross as a sign of our faith in action. As one student aptly put it, “justice is our brand.” Father Ryan did not and does not seek to completely overturn the garment industry or change corporate policies. Our primary focus has always been as an educational institution called to teach our students in the Catholic tradition. The Workers’ Rights Initiative puts flesh on this quote from Catholic activist Dorothy Day: “What we would like to do is change the world--make it a little simpler for people to feed, clothe, and shelter themselves as God intended them to do. And, by fighting for better conditions, by crying out unceasingly for the rights of the workers, the poor, of the destitute… we can, to a certain extent, change the world; we can work for the oasis, the little cell of joy and peace in a harried world. We can throw our pebble in the pond and be confident that its ever-widening circle will reach around the world.”

While still advocating for workers’ rights, Father Ryan also has the responsibility to provide quality athletic uniforms and gear for all student-athletes. Toward this effort, for a brief time, Father Ryan High School thoroughly vetted and then partnered with Russell Athletics in the procurement of athletic apparel. However, Russell and its parent company, Fruit of the Loom, stopped producing athletic apparel in the fall of 2017, and the partnership with this company was dissolved. Since fall 2017, Father Ryan has been in partnership with Under Armour. While no corporation is perfect, Father Ryan has been grateful for Under Armour’s commitment to American-made manufacturing for some of its products; American-made guarantees a minimum wage and humane working conditions.

Over five years after the Workers’ Rights Initiative began, Father Ryan High School still marks every athletic team uniform with a patch of the Jerusalem Cross as a sign of solidarity with workers around the world. This patch no longer covers up the company’s logo since we seek to be transparent in our partnerships and always seek to vet those with whom we have chosen to work. Instead, the patch finds its place in a prominent position on the uniform to set our students apart and promote dialogue between players and with opposing teams. This decision and conviction is shared across the senior administration of Father Ryan High School. A final question many have is – why athletic apparel? We believe that, in choosing to focus in this area, we reach a broad number of students and the public. We also teach our students that, when they go out on the field or court, they are representatives of faith, knowledge, and service. This is true in their conduct, their character, and especially in that patch stitched to their uniform – one small cross, one small pebble making ripples around the world.